Arguably “the voice of the travel industry” – is one of the world’s most well-known, respected, and sought-after travel industry analysts and advisors.  Henry has been an travel industry analyst for more than 14 years, focusing extensively on the airline, lodging/hospitality and cruise sectors. He has published more than 125 reports on a variety of topics, including traveler behavior, loyalty marketing, eCommerce, mobile, product merchandising/retailing, and distribution.

Gene Quinn is a pioneer in travel, digital media, financial services, technology and e-commerce. He is Co-Founder and former CEO of Tnooz and led the company from launch in 2009 through 2016. In October 2018 Tnooz was acquired by Northstar Travel Media, which also owns Phocuswright and Phocuswire.

Gene is former Chairman and investor in Phocuswright, a leading research and strategy company at the intersection of travel and technology. Acquired by Northstar Travel Media in 2012, Phocuswright remains an industry thought leader.

At Tnooz, Gene's team produced dozens of hackathons in the US, Europe and Asia that brought together more than 2,000 developers and scores of APIs from leading travel companies and organizations, including Booking.com, Expedia, Alibaba, Amadeus, Sabre, Travelport, TripAdvisor, IBM, Hewlett Packard, Lufthansa, Air Berlin, Hotelbeds, GetYourGuide, SITA Labs, Airbus and San Francisco International Airport. Many of the hackathon teams produced travel planning and personalization prototypes based on mobile themes and messaging platforms, which are at the core of iVeew's business.

Gene also is on the advisory board of OpenTravel Alliance, the non-profit trade group that developed interoperability software standards for the travel industry. He also is an adviser and investor at FutureStay, an innovative workflow technology for property managers in the on-demand vacation rental space.

Previously, Gene held executive positions in digital business development at Viacom's MTV Networks and Tribune Company. He served on public company boards at CheckFree and OpenMarket and non-profit advisory boards at MIT's Media Lab and the National Center for Supercomputering Applications at the University of Illinois, the birthplace of the Mosaic web browser.

Gene holds a BA in English literature from the University of Delaware and an MBA from the Kellogg School at Northwestern University.

Tom Griffin, the President of iVeew,Inc. and a visionary who believes that advances in technology can lead to significant advances in business value and ROI. He leads the iVeew team and works with enterprise customers to help them craft the right communications for the right products into the hands of the right customers just when they need it.

Tom officially began development of iVeew in January 2011 with the rollout of an Enterprise platform for the travel and hospitality industry incorporating geo-fencing mobile applications and late last year after the announcement by Apple of iBeacons technology will occur July, 2014.Tom’s expertise in the online travel and hospitality industry often allows him to speak at major travel events and participate in panel discussions focusing on travel solutions at technology conferences around the world. He has sat on a number travel related advisory boards.

Meeting Guest Expectations in the New Age of Personalization 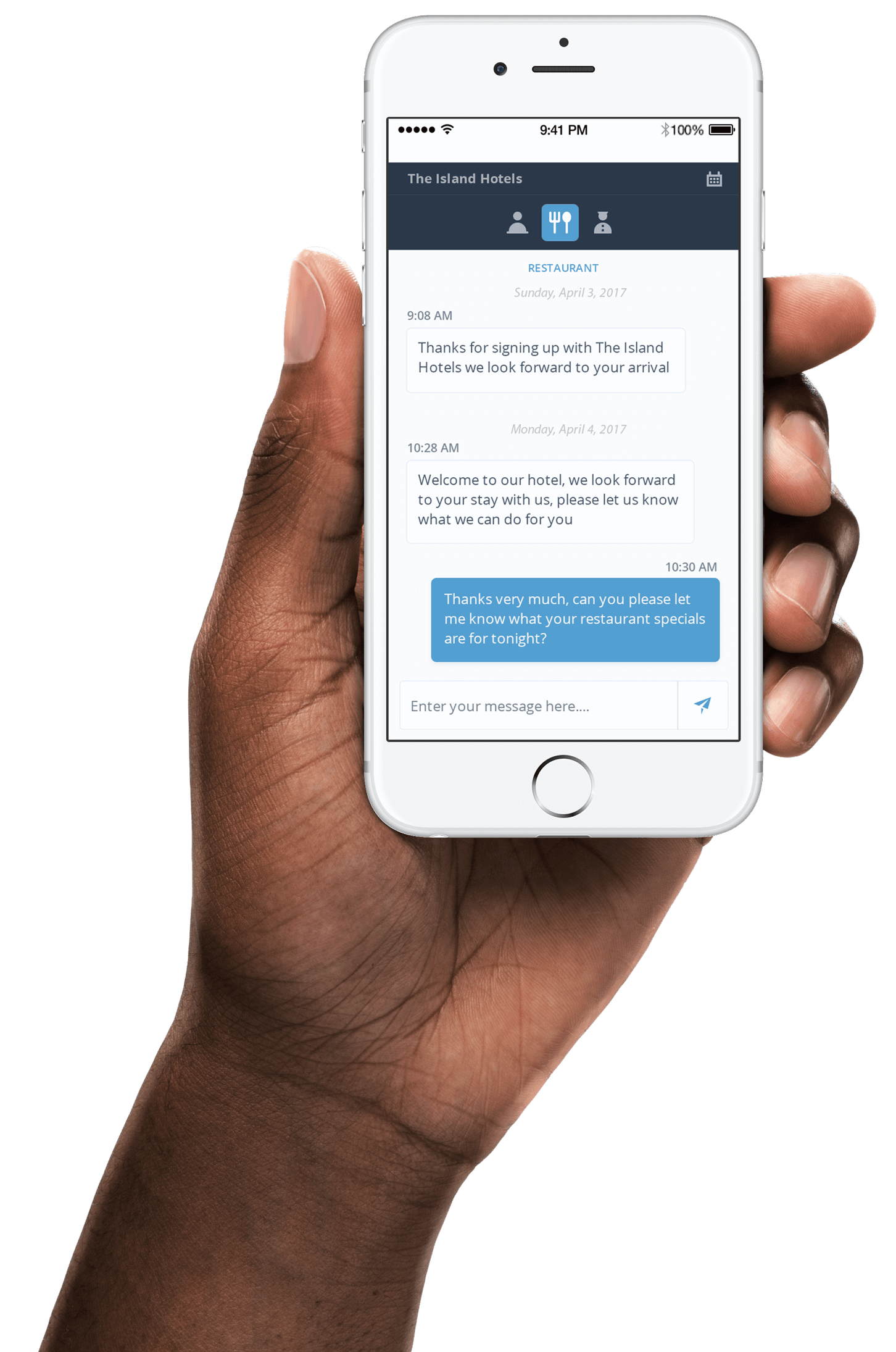 guestext meets hotel guest’s expectations! Communication has never been easier. With guestext, hoteliers can form an immediate personalized relationship with guests even before they arrive. Our opt-in messaging platform opens the door to creating total guest satisfaction which means building guest loyalty.

Personalize guest relations with guestext and win more repeat business! 60% of hotel guests are likely to choose a smartphone enabled hotel! Mobile booking rates are up by 88% this year. The guestext loyalty program captures the guest data needed to engage effectively with guests after their departure. The benefit of using guestext is intermittent scheduling of rewards ("surprises") can be very effective in relating to guest.

guestext hotels can close more group sales by offering guestext in RFP responses! The hotel can create and manage multiple groups for their group organizers or they can authorize the organizer to manage guestext with their participants. guestext group messages can be sent to and received by all group attendees, whether they are staying at the host hotel or not.

For Hotels
For Guests